Skip to content
Posted inPapers
Posted by By physicist2 November 25, 2022 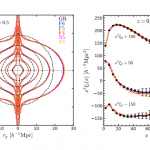 Shortly after its discovery, General Relativity (GR) was applied to predict the behavior of our Universe on the largest scales, and later became the foundation of modern cosmology. Its validity has been verified on a range of scales and environments from the Solar system to merging black holes. However, experimental confirmations of GR on cosmological scales have so far lacked the accuracy one would hope for — its applications on those scales being largely based on extrapolation and its validity there sometimes questioned in the shadow of the discovery of the unexpected cosmic acceleration. Future astronomical instruments surveying the distribution and evolution of galaxies over substantial portions of the observable Universe, such as the Dark Energy Spectroscopic Instrument (DESI), will be able to measure the fingerprints of gravity and their statistical power will allow strong constraints on alternatives to GR. In this paper, based on a set of N-body simulations and mock galaxy catalogs, we study the predictions of a number of traditional and novel summary statistics beyond linear redshift distortions in two well-studied modified gravity models — chameleon f(R) gravity and a braneworld model — and the potential of testing these deviations from GR using DESI. These summary statistics employ a wide array of statistical properties of the galaxy and the underlying dark matter field, including two-point and higher-order statistics, environmental dependence, redshift space distortions and weak lensing. We find that they hold promising power for testing GR to unprecedented precision. The major future challenge is to make realistic, simulation-based mock galaxy catalogs for both GR and alternative models to fully exploit the statistic power of the DESI survey (by matching the volumes and galaxy number densities of the mocks to those in the real survey) and to better understand the impact of key systematic effects. Using these, we identify future simulation and analysis needs for gravity tests using DESI.

More details from the publisher >